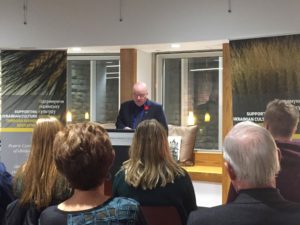 A travelling exhibit created by the Canadian War Museum made its way to Saskatoon and the STM Art Gallery on the University of Saskatchewan campus. The display features photographs from the National Library and Archives of Canada as well as period artifacts from a private collection. 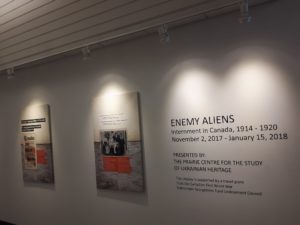 On November 10, an opening reception was held, which featured a guest speaker from the Canadian War Museum, Dr. Peter MacLeod, Director of Research, who spoke about the origin and genesis of the exhibit. Dr. Bohdan Kordan delivered remarks on the impact of internment and remembrance. This was followed by a selection of short readings – first-person accounts of the internment experience – presented by students
from the University of Saskatchewan Ukrainian Students Association. 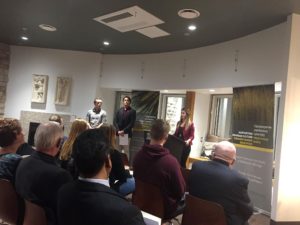 Hosted by the Prairie Centre for the Study of Ukrainian Heritage (PCUH) in co-operation with the STM Art Gallery, the exhibit is supported by a travel grant from the Canadian First World War Internment Recognition Fund. The exhibition will run from November 2, 2017 – January 15, 2018. 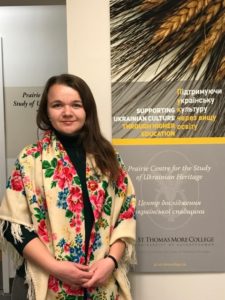 The Prairie Centre for the Study of Ukrainian Heritage offers scholarships in support of University of Saskatchewan graduate students at the MA level, who are working on topics relevant to Ukraine, Ukrainian-Canadian identity, or the Ukrainian experience. MA Scholarships in the amount of $1500 are provided in direct support of the thesis-writing phase for students registered with the University of Saskatchewan’s College of Graduate Studies and enrolled in a graduate degree program.

In 2017-18, Iryna Kozina, an MA candidate in the Department of History, was awarded a scholarship for her thesis proposal “Prickly Questions: The Yorkton Ukrainian Redemptorists’ Response to Sociocultural Changes in Saskatchewan, Canada (1960-1980).” Iryna explores the writings of the Redeemer’s Voice Press, the Catholic publishing house of the Ukrainian Redemptorists of the Yorkton Province, and how the priests approached changes in the rapidly-evolving 1960s. The expected date of completion is summer-fall 2018.