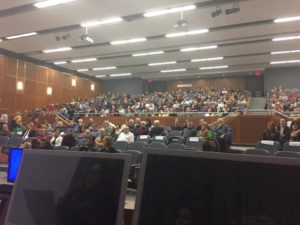 The University of Saskatchewan Ukrainian Students’ Association and The Ukrainian Canadian Students’ Union (SUSK), together with dFilms, hosted a free pre-screening of the feature film “Bitter Harvest” in the auditorium of the Medical Sciences Bldg, March 1, 2017.  Saskatoon was selected as one of four cities across Canada for the screening of this important film. The evening event boasted a turnout of 300 + people. In attendance were Members of the Legislative Assembly. Following the conclusion of the film, Katya Khartova led the audience in the singing of Vichnaya Pamyat (Memory Eternal) in remembrance of the millions of victims of the Holodomor (Death by Hunger) — the Soviet genocide.  The pre-screening provided a tremendous opportunity to bring public awareness to this tragic event in human history.