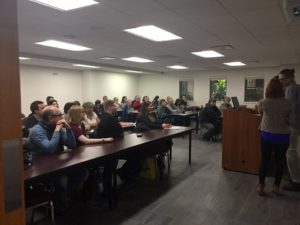 On February 15, 2017, the first-ever University of Saskatchewan Ukrainian Students Association (USUSA) research colloquium was held at STM.  The objective of the colloquium was to showcase before a general audience the research being conducted by graduate and undergraduate students studying in the Ukrainian Studies field and/or writing on subjects that pertain to Ukraine. Reflecting student interests, the presentations were on a wide range of topics. Ashley Halko-Addley spoke on the rituals of baptism in the Ukrainian Orthodox Church as a rite of incorporation. Nykole King examined the historical sources for competing ethnic and civic nationalisms in modern Ukraine. Marnie Howlett, an MA candidate in the Dept. of Political Studies, looked at how the idea of a ‘Ukrainian nation’ was reconceptualised as a political community in the wake of the Maidan. Meanwhile, Mitch Dowie, also an MA Political Studies student, discussed Stephen Harper’s foreign policy engagement with Ukraine during the recent conflict using a Neo-classical Realist framework. 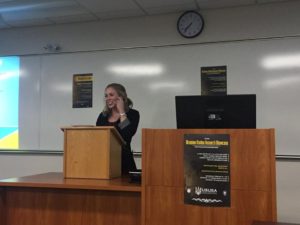 The evening affair was well-attended by a supportive and enthusiastic crowd of students and community members. Conversation carried over to a reception held in the Atrium. The success of the event suggests that it will be an annual affair. A shining example of the extraordinary energy of the Ukrainian student body on the UofS campus, the colloquium represents not only academic excellence academically but demonstrates strong organizational leadership.

The event was sponsored by the Prairie Centre for the Study of Ukrainian Heritage which provides the USUSA with financial assistance and institutional support. 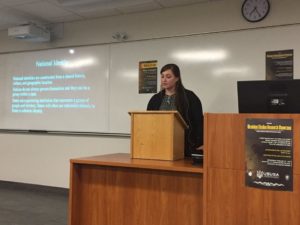 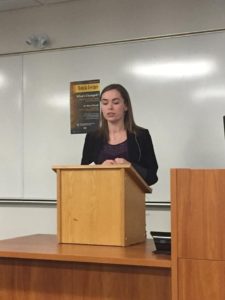 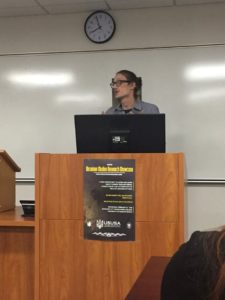 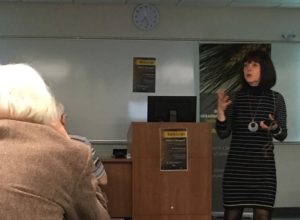 Professor Marta Dyczok of the University of Western Ontario delivered the 20th annual Mohyla Lecture the title of which was What’s Changed? The Evolution of Ukraine’s Media Since Independence. Author of Ukraine’s Euromaidan: Broadcasting through Information Wars with Hromadske Radio (2016), Dr. Dyczok is a specialist on political developments in the post-Soviet space with special interest in the media.

Prof. Dyczok spoke of the evolving nature of the media landscape in Ukraine, drawing attention to the impact of globalization and the continuing influence of Russia on both the telecommunications and digital platforms. She emphasized the important role of public broadcasting and the politics around the creation of Hromadkse Radio and Hromadske TV. Noting the recent transformation of Ukraine’s state media into a public broadcaster, Prof. Dyczok suggested this was a possible ‘game-changer’ in as much as it might allow for greater accountability and transparency – an important consideration in the context of the hybrid Russo-Ukrainian conflict (which extends to the information sphere) and the wider efforts at democratization.

The 2017 Mohyla Lecture, delivered February 17, 2017, marks the 20th anniversary of the Mohyla Lecture Series. Created at St. Thomas More, it is the premier academic event devoted to Ukrainian Studies at the University of Saskatchewan. This year’s event was co-sponsored by the Ukrainian Canadian Congress – Saskatchewan Provincial Council. The event was organized and hosted by the Prairie Centre for the Study of Ukrainian Heritage.

On December 1-2, Ukrainian Oral History Association (UOHA) hosted in Kharkiv an international Symposium “Oral History in Times of Change: Social Contexts, Political Challenges, Academic Standards”. The conference marked UOHA’s 10th anniversary and was organized at Karazin National University in cooperation with Prairie Centre for the Study of Ukrainian Heritage. Dr. Khanenko-Friesen traveled to Kharkiv to deliver a Keynote address “How Oral History Changed the Nation: Truth and Reconciliation in Canada.” The presentation was well received and offered an opportunity for the conference participants to consider various models of national reconciliation in post-conflict societies around the world. 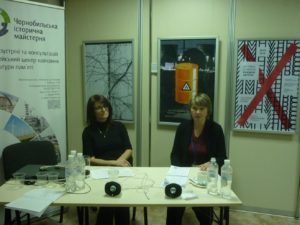