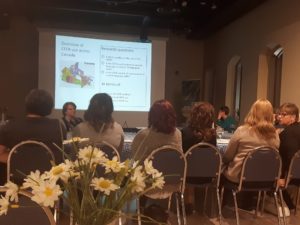 The Prairie Centre for the Study of Ukrainian Heritage (PCUH) at St. Thomas More College, with the financial assistance of the Ukrainian Canadian Congress – Saskatchewan Provincial Council and the Saskatchewan Teachers of Ukrainian (STU) organized a Ukrainian Language Assessment Symposium on October 13-14, 2017. The symposium, planned and prepared by PCUH Affiliate Nadia Prokopchuk, brought together educators from Saskatchewan, Ontario, and Alberta responsible for Ukrainian language education and training to learn more about the Common European Framework of Reference (CEFR), an international language reference tool that has gained considerable momentum in Canadian language learning programs in the past decade.

The symposium participants represented nine programs and institutions from across the 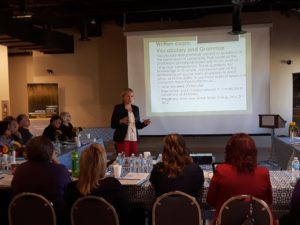 The symposium began with an evening reception and an informative address by the keynote speaker Dr. Laura Hermans-Nymark, principal author of the book The Common European Framework of Reference: A Guide for Canadian Educator. The following day focused on Ukrainian language assessments and student language portfolios that are aligned with CEFR levels. Presentations were given by: Dr. Olenka Bilash and Dr. Alla Nedashkivska, Ukrainian Language Education Centre, University of Alberta; Nataliya Nayavko and Melody Kostiuk, Alberta Ministry of Education, and Olena Hartsula, former Alberta ministry advisor, and; Nadia Prokopchuk, PCUH Academic Affiliate. Liubov Shchitka of the Department of International Cooperation and European Integration, Ministry of Education and Sciences, Ukraine delivered a special presentation (via Skype) on CEFR-based Ukrainian language exams for foreigners.

Support for use of the CEFR in Canadian language programs has grown largely due to:

Symposium participants identified an overarching need for a bank of skill descriptors, compiled from existing Ukrainian and English language portfolios. Plans are underway for a follow-up phase to the Ukrainian Language Assessment Symposium. During the next several months, a working group of representatives from the symposium will review and sort descriptors by age of learners and stages of language learning. The goal is to gather samples and create a stock of Ukrainian language assessment tools that can help teachers to identify student language levels along the CEFR scale.