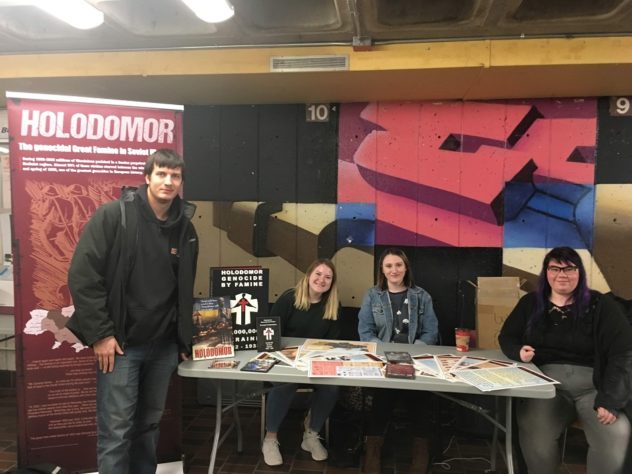 Members of the University of Saskatchewan Ukrainian Students Association marked Holomodor Awareness Week with several activities on campus.
On Sunday, November 18 they held a Wheat Sheaf Making and Distributing event in the STM Student Lounge. Wednesday, November 21 saw USUSA members creating awareness in the Arts Tunnel with their “Holodomor-in-a-Box” interactive learning experience. A vigil commemorating Holomodor victims was planned for Thursday, November 22 in the STM Chapel.

Each event was designed to bring awareness to the Holodomor, a genocide of the Ukrainian people that occurred between 1932-1933 and engineered by the leadership of the Soviet Union. Millions of individuals in the Ukrainian countryside died of starvation as an instrument of terror and repression. The policy of starving the countryside was aimed at destroying the peasantry as the foundation of the Ukrainian nation; hence, the genocidal nature of the policy.  For generations to follow, Soviet authorities imposed a blanket of secrecy on the event, keeping it hidden while disseminating disinformation about the cause and extent of the Holodomor.

USUSA executive member Sam Campling wrote a press article, describing the historical event and its significance in the context of Ukraine’s struggle for national self-determination. The article was posted on the St. Thomas More College website as part of the campaign to promote awareness on this dark page in Ukraine’s past and world history.